Some time ago, I worked with Lyssa Adkins to improve my coaching skills. One of our areas of focus was team start-up and the expectation for our teams to become high performing. In our work together, Lyssa shared some team start-up exercises to use with new teams. I had an opportunity to put some of these ideas into practice recently, and wanted to share that experience with you.

This article will focus on the work I did around process.

Starting a team off on the right foot is an essential part of building solid foundations for the team. Don’t skip this step. It’s true that start-up exercises take some effort and thought to prepare; however, the work that is put in at the start will pay dividends further down the line.

Our first exercise was focused on establishing a strong agile core. In speaking to me, Lyssa referred to Agile 101—a process of bringing teams back to the core of Agile. As Agile practices expand inside an organisation and into more teams, teams will naturally start to drift away from the core of Agile (or Scrum in my case) and drift away from the original framework. They might also bring with them habits from previous teams, some of which were appropriate for that person’s old team but might not be appropriate to the new.

A good agile coach should slow right down and meet the team where they are. Before racing ahead, the coach must first understand where the team is, only then can the coach help the team understand how a return to core practices will help them achieve their goals.

To bring the team back to core, we started with a whiteboard draw and talk. We only spent 15 minutes or so on this, so it doesn’t have to take long. The essence is to let the team know the basis that you will be coaching them from. I spent 15 minutes drawing on the white board the Scrum framework and flow, explaining what we would do in each ceremony, what artifacts we would produce or use. None of this was new. I was simply restating the core ceremonies and artifacts of scrum. What it did give me the opportunity to do, however, was re-enforce the principles of self management and team autonomy. The team asked a few questions, as you would expect, and I answered as best I could. Generally, the overview went over well.

By doing the draw and talk, the team members could see for themselves where they had strayed from core Scrum practices. At the same time, though, we could also see how we could move back to the core through coaching and daily work. After our run-through, we handled some logistics; agreeing on a sprint length, writing our definition of done, and specifying details, such as sprint start and end days and the time and location of daily scrums.

Having an informal whiteboard discussion was a non-confrontational way of achieving this end. The team members learned together as a team and bought in to the reasons for re-establishing a strong core.

With all this in place I then moved onto high performance. I shared that as a team our goal should be to become a high-performing team. I said that I knew we could get there and then started with the high-performing tree metaphor using the work I had done with Lyssa as my basis.

Now you must bear in mind that teams may not be comfortable with exercises like this and they may be rather alien to many of us so I explained why we use metaphors in this activity and why I didn’t mind if they thought I was mad. Being mad wasn’t all that bad ? Lyssa refers to being ‘whacky and wild’ in your coaching and I think by the end of the exercise, they certainly thought that I was. However, once you have set an expectation that you can be whacky and wild, it allows you to go back to that state as required to help the team push their boundaries.

I started by drawing a tree from the roots up. Combining  some of the language from Lyssa’s version of the tree with Tobias Mayer’s version of the foundations – there were important but subtle differences between the two.

We then began to expand the metaphor, drawing the tree, the water through the roots making the tree strong, and the beginnings of a strong trunk, which represents the values of scrum. Following this we explored the leaves that would form, allowing light to nourish the tree. I explained how each leaf was a high performance trait. It was also a very sunny day with the light streaming in through a window so that may have helped with the metaphor. I then noted that, with the water feeding the tree from the roots and the light feeding the tree through the leaves, the tree would bear fruit, which are the results of our quest for high performance.

What did our High performance tree look like and reveal?

I described the roots (or values) of the tree as follows:

The leaves (or high performance traits) were these:

And the fruits of our tree, our indicators of high performance were as follows:

Now I must say that while some met my metaphorical drawing with wonderment, amazement, and attentive listening, I suspect there were others that just thought I was a little nuts. In fact, I think I detected a little giggling at some point as I took people outside of their comfort zone. Even so, the metaphorical exercise helped plant the seed of high performance. As a group, we now had a visual representation of our quest to achieve it that we could refer back to when things were going wrong. We could look at our high-performing tree and determine what we are missing or not doing well. We might have been a little uncomfortable creating it, but after the exercise we had a very clear reference point for high performance.

In our case, our Agile 101 process start up worked really well. It was a non confrontational way of getting the team back to the core and allowing everyone to have the same picture of why we do the things we do.

The high-performing tree worked really well despite my lack of artistic ability and the stifled laughter from some of the team members. There is no doubt in my mind that it sowed the seed that we as a team should all expect high performance. I hope that the team will refer back to it often.

These two exercises start the team off on the right path and allow us to build for the future; the only downside was the straight jacket the team bought for me after the event. 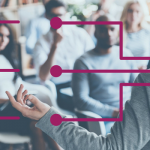 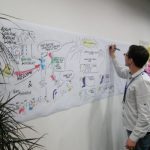