Teamwork is more of a birthright than recent history would suggest. Since we first walked out of Africa to conquer the world and climb to the top of the food chain, we have relied on teamwork and close cooperation to thrive. Industrialisation and it’s reductionist approach to labourrepresents seconds in our ancestral timeline. But, dominates our thinking on the nature of work and organisation. If we are to continue to thrive, I believe we must leave our recent foray into isolationism behind and rediscover our cooperative future.

Faced with an ever-increasing number of complex global social and political challenges, I’m reminded of Margret Heffernan’s take on competition and co-operation. Namely, that the old industrial order of clawing competition –  pitting us against each other, fighting tooth and nail to exploit people and resources – may have served to get us this far, but the challenges left in its wake will not be solved by continuing to play a thuggish game of winners and losers.

The workforce as machine

The great engine that drove the industrial revolution was the separation and specialisation of work, to a predictable machine like process with the workers the metaphorical cogs. This process was made ever more efficient through the stepwise optimisation of time and motion.

As the technology that drove Industrial production process matured there was greater focus on reducing work to the simplest sequence of repeatable tasks. Turning what once were workshops into efficient machines of mass production – factories. Though this reductionist approach may have been optimised for the effort needed to crank out a widget by separating out threading a bolt from tightening a nut. It came at the expense of human agency.

By reducing the work to simple, repeatable tasks factories created opportunity for millions of workers. The double edge sword of industrialised work is that it reduces work to such a mundane controlled simplicty that almost anyone can be trained to do it. It’s byproduct, a mass de-skilled workforce beholden to the factory system with scant possibility to produce value outside of that system. Workers who once may have created a whole product were now merely responsible for a small part of the process. Their work became devoid of meaning and the satisfaction of creation.

The workforce as creator

As we leave the industrial age behind and enter a brave new world of creative and networked knowledge work we need ‘real teams’ more than ever.

In his excellent book Sapiens, Yuval Harari makes the case that we, Homo Sapiens, became the dominant force on the planet about seventy thousand years ago when we developed the ability to use complex language. This allowed us to begin to co-operate in new ways. Before the appearance of these complex language skills, we were limited to simple language like “careful, a snake” or “look, an apple”. Our use of language gave us a way to share a narrative about our surroundings, and to go even further by creating legends and stories that described ideas not tied to objective reality. This gave rise to the formidable power of abstract thought, summed up by the saying of the Buddha “the finger that points to the moon is not the moon”.

This new ability to share stories and create myths gave us a shared identity and allowed us to band together with larger groups of like-minded people. Another theory has it that our newly evolved language gave us something more important to talk about. Other people. Language evolved as a way of gossiping. By sharing information about other members of our tribe, we can talk about who we trust, who is an excellent hunter of bison, and who is better at making spears. According to this theory, language gave rise to Homo Sapiens as a largely social animal and gave us the ability to navigate the social complexity of maintaining relationships in larger groups.

Through the use of this unique ability we became the first species to harness social evolution to co-operate in ever greater groups. Eventually out-innovating others, to become the dominant species on earth. We colonised and humanised every inch of the planet not through our individual capabilities; a chimpanzee can easily beat us in a one on one fight. We did it by finding creative ways to co-operate and work together.

It’s clear that our ability to team up and work together towards a common purpose with a set of shared beliefs was critical to our success as a species, and I believe it is fundamental to the future success of humanity. The future is ours to create, and if we want to continue to flourish I believe we need to do what we Homo Sapiens do best; work together in service of the whole.

Recently I looked at the difference between a ‘real team’ and a co-acting group. Focusing on enabling real teams through bounded membership, task interdependence, stability or re-teaming and clearly delineated authority.

This post was originally published by Eben on Medium. 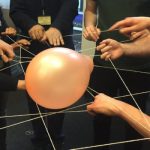 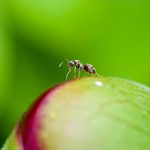 What have exploding ants got to do with Scrum?Team and Leadership